Welcome to the Rally festivites in Vindeln municipality

Västerbotten is for the first time hosting the annual FIA WRC competition Rally Sweden on 24-27 February.
Four of the competition's 19 specialstages will be held in Vindeln Municipality, specificaly in the rural villages of Kamsjön and Kulbäcksliden.
On Friday 25 February, two sections will be driven in Kamsjön and on Sunday, the world stars will take the stage on the roads around Kulbäcksliden.

Rally Sweden is one of 16 sub-competitions in the World Rally Championships (WRC) and the only distinct winter rally. It is Sweden's largest annual event
200,000 visitors during four days and 100 million TV viewers around the world. To add another dimension to the size of the event, the World Rally Championship will require a staff of a total of 4,000 (!) Officials and in addition, 450 journalists from 25 different nations will monitor and report from the competitions.

Rally Sweden is not just about the cars and the folk festival. It is also about nature and the forest - perhaps the rally's largest and most powerful arena. For a few years now, Rally Sweden has had a vision of being a completely climate-neutral sporting event in the future. Together with the clubs, partners, today's research and the energy of the future, Rally Sweden has come a long way in its journey.Reed more; https://rallysweden.com/en/sustainability/ 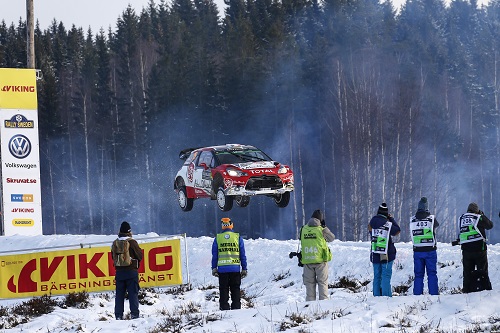 PROGRAM
The stages in Vindeln municipality are held during the following days.

In Umeå, there are audience arenas to follow the rally closely; The Red Barn Arena | Rally Sweden
The red Barn; This is the arena built on the I20 site. Here you can see when the cars pass at high speed up close.

Skeppsbron; Here, entertainment will be offered near the center by the Ume River. This is also where the After Rally party takes place.

Rådhustorget; In central Umeå, there will be activities for the family.

Nolia area; This is where the teams are during the rally days. Here you can with festival passes visit the service center and see the cars up close. This is also where the press center is for journalists.

OTHER QUESTIONS AND ANSWERS ABOUT THE RALLY WC
Got a question for Rally Sweden 2022 tickets?
From 14 February, it is possible to buy tickets at Coop Vindeln, Häradsvägen. Information and maps; https://rallysweden.com/en/information/retailers/
Information regarding ticket categories and prices for Rally Sweden 2022 can be found here; https://rallysweden.com/en/information/tickets/

Can I get my ticket on my mobile?
No. Your ticket to Rally Sweden is only available in physical form. You can not get your ticket digitally.

Will I be able to pay with a digital currency transfer during the World Rally Championship?
Since many of the distances are run in forest and land, it is important that you bring Swedish crowns with you during the competition to pay for food and coffee in the salepoints and more. A tip is to buy the ticket in advance before you arrive at the audience seats.

Will the World Rally Championship be handicap-accessible?
On Sunday's stages, there will be built-up and accessible handicap areas on the stages that run in Kulbäcksliden / Fäbodarna. You can drive all the way with a car and follow the competition from the ground floor.

Can I get my ticket on my mobile?
No. Your ticket to Rally Sweden is only available in physical form. You can not get your ticket digitally.